Customers often wonder how thye can report an issue they are having with the software & then what happens when they do report an issue. Not every issue is dealt with the same. Depending on severity and frequency of reporting, an issue will be dealt with in different ways. The sequence of events usually follows this path.

1) The customer calls or emails the technical support department with what they believe to be a problem.

2) The tech department determines that there may be a problem that isn’t fixable with a parameter or procedural adjustment. Often the customer is asked to email an example of the problem. We have them use the Utility program, Email Job… and to keep Save Parms checked so we get most of the data files we need to reproduce the issue.

3) When tech gets the emailed job, it is opened and then investigated to see if it is a user issue or a program issue. If it’s a program issue, the next step is to write up an Issue number in our issue tracking system, SupportIT. This number is known as the Sit #.

4) A short description and scenario for duplicating the problem is written up. The customer reporting the issue is noted so when the issue is resolved, at least that customer can be notified directly. The customer is made aware of the Sit # so they can reference that number when asking about the issue later. This Sit# is also referenced in the esupport forums if the issue was reported there.

5) The issue will be assigned a Project number for further attention by development.

6) The project number is assigned a relative priority and any further notes for the development staff are added. 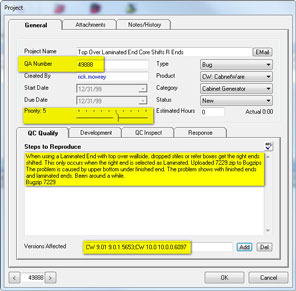 7) Finally, after the project has been worked on, it goes to Quality Control for testing. If it passes, responsible parties are notified and the fix will be put into a future build of the program. If it doesn’t pass, it is sent back to development.

Depending on the severity of the issue and the status of the update cycle, the fix may be put in the current version or it will be put in the next release. The list of Sit #’s dealt with will be shown in the esupport Wiki for the concerned released product. 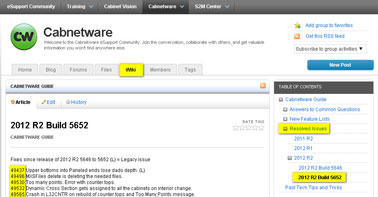 Simply fill in your details below and one of our team will contact you shortly:

There are no scheduled upcoming events.